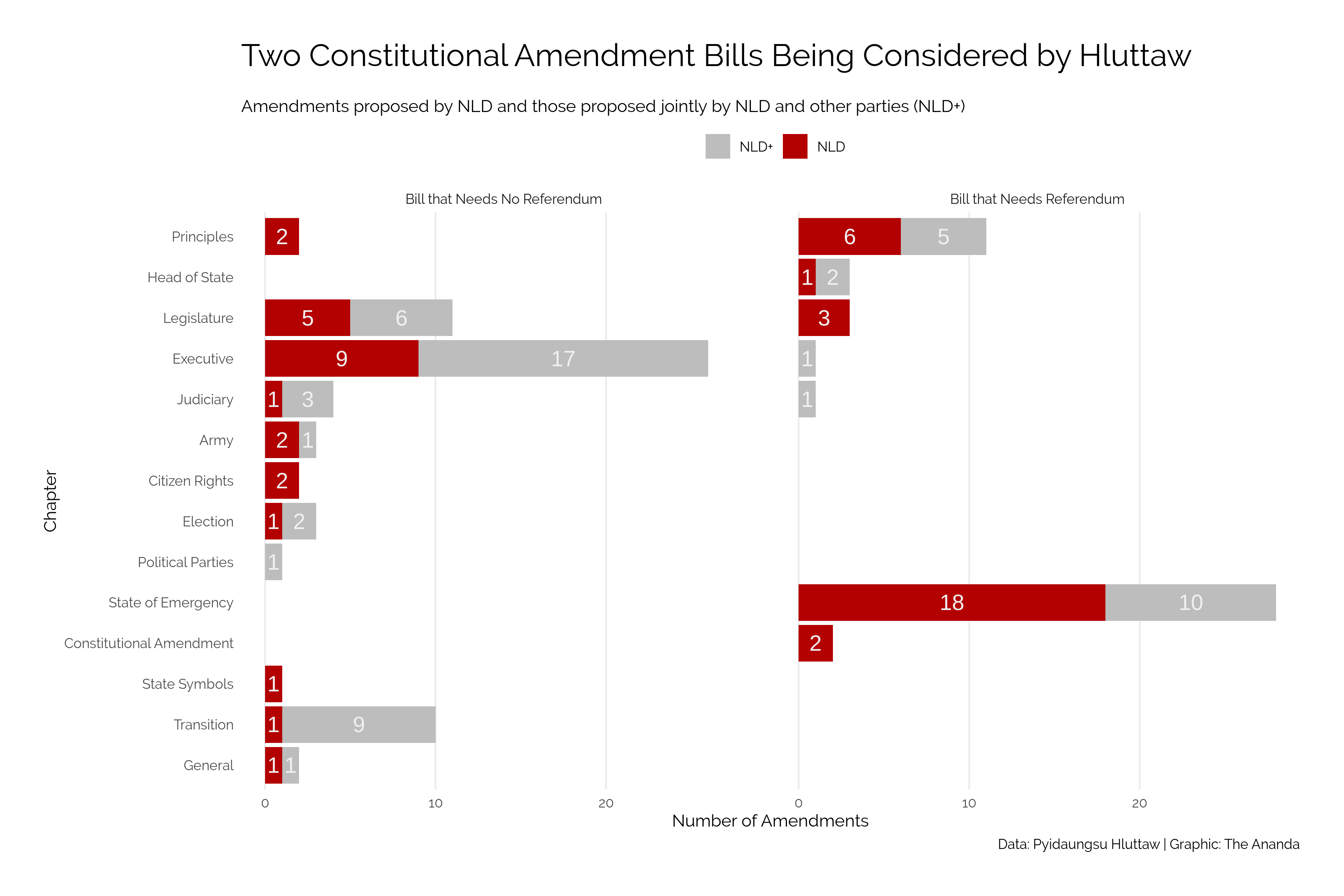 Two amendment bills were submitted to the Pyidaungsu Hluttaw by the Joint Committee on Amending the 2008 Constitution on 27th of January 2020.

What’s in the bills?

The two bills’ proposed amendments are identical to the 114 suggestions previously given to the Joint Amending Committee by the NLD, precisely representing the ruling party’s agenda. Of the 2008 Constitution’s 15 Chapters and appendix Schedules, only Chapter 2: State Structure; Chapter 15: General Provisions, and; Schedules are not proposed for amendment. There is only one terminological amendment in Chapter 10: Political Parties, and one amendment related to the national flag in Chapter 13: State Flag, State Seal, National Anthem and the Capital.

This article looks at the amendments in the two bills, with the exception of those proposed for Chapter 1: Basic Principles of the Union; Chapter 11: Provisions on State of Emergency and; Chapter 14: Transitory Provisions, as these sections will be covered in a separate article.

It is proposed the age limit for the President and Vice-president should be reduced. Regarding their qualifications, the following change article was approved by the first Hluttaw (2010-2016), but still requires a public referendum to be confirmed.

Original: “shall be well acquainted with the affairs of the Union such as political, administrative, economic and defense”

Replacement: “shall be well acquainted with the affairs of the Union such as political, administrative, economic and security”

A most controversial article in the qualifications required of a head of state is 59 (f), which bars those with foreign parents, spouse or children and/or those with connections with a ‘foreign power’. This is proposed for removal.

The inclusion of army representatives in the Hluttaw is proposed to be reduced step-by-step from the current 25% over the next 3 parliaments, to 15% from 2020, 10% from 2025 and 5% from 2030. The Hluttaw Defence and Security Committees both Pyithu and Amyotha Hluttaws is proposed for removal.

An amendment is proposed to give Region/State Hluttaws the power to legislate for matters in the Schedule 3 (policy areas devolved to self-administered areas). Schedule 5 (tax raising powers already in control of Regions/States) is added also, to make clear that Region/State Hluttaws can legislate on relevant forms of taxation. Similarly, self-administered areas will have their legislating powers extended to Schedule 5 as well.

In the formation of National Defence and Security Council, the current constitution includes its membership as follows:

Proposed amendments are to remove the Defence Minister, and add the Deputy Speakers from both the Pyithu and Amyotha Hluttaws. This move is seen as an attempt to end the Tatmadaw’s majority control of the Council and would signal a step towards democratic oversight of the defence services.

The age limit of Union Ministers is to be reduced and the provision that restricts participation in political party activities during an individual’s tenure as a Minister is proposed for removal. In the appointment of the Attorney General, Auditor General, Deputy Attorney General and Deputy Auditor General, the provision about their qualification “person who is eminent in the opinion of the President” is to be revoked. In the appointment of the Chairman and members of the Naypyidaw Council, the provisions “who have other qualifications prescribed by the President” and “the restriction from taking part in party activities during their appointment” are to be revoked.

Chapter 8: Citizen, Fundamental Rights and Duties of the Citizens

In the provision “No person shall, except matters on precautionary measures taken for the security of the Union or prevalence of law and order, peace and tranquility in accord with the law in the interest of the public, or the matters permitted according to an existing law, be held in custody for more than 24 hours without the remand of a competent magistrate”, it is proposed to remove the exception.

The threshold requiring at least 1% of original voters from the relevant constituency to be able to recall their MP is increased to 20%. Relating to the UEC member qualification, the provision “shall be deemed by the President to be an eminent person” is proposed to be revoked.

Chapter 12: Amendment of the Constitution

In the provisions relating to the majority required to amend the Constitution under 436a and 436b, it is proposed to change this to two-thirds of elected MPs (from seventy-five percent of all MPs including the army representatives). For amendments to provisions listed in 436a the changes must be supported by the public in a referendum.

Though the two amendment bills are based the 114 suggestions submitted by the NLD to the Joint Amending Committee, there are similarities with other parties.

The following tables highlight the provisions where other parties have proposed amendments similar to those put forward by the NLD.

Table: Similar amendments among parties in the bill relating to the Article 436 (a)

Table: Similar amendments among parties in the bill relating to the Article 436 (b)